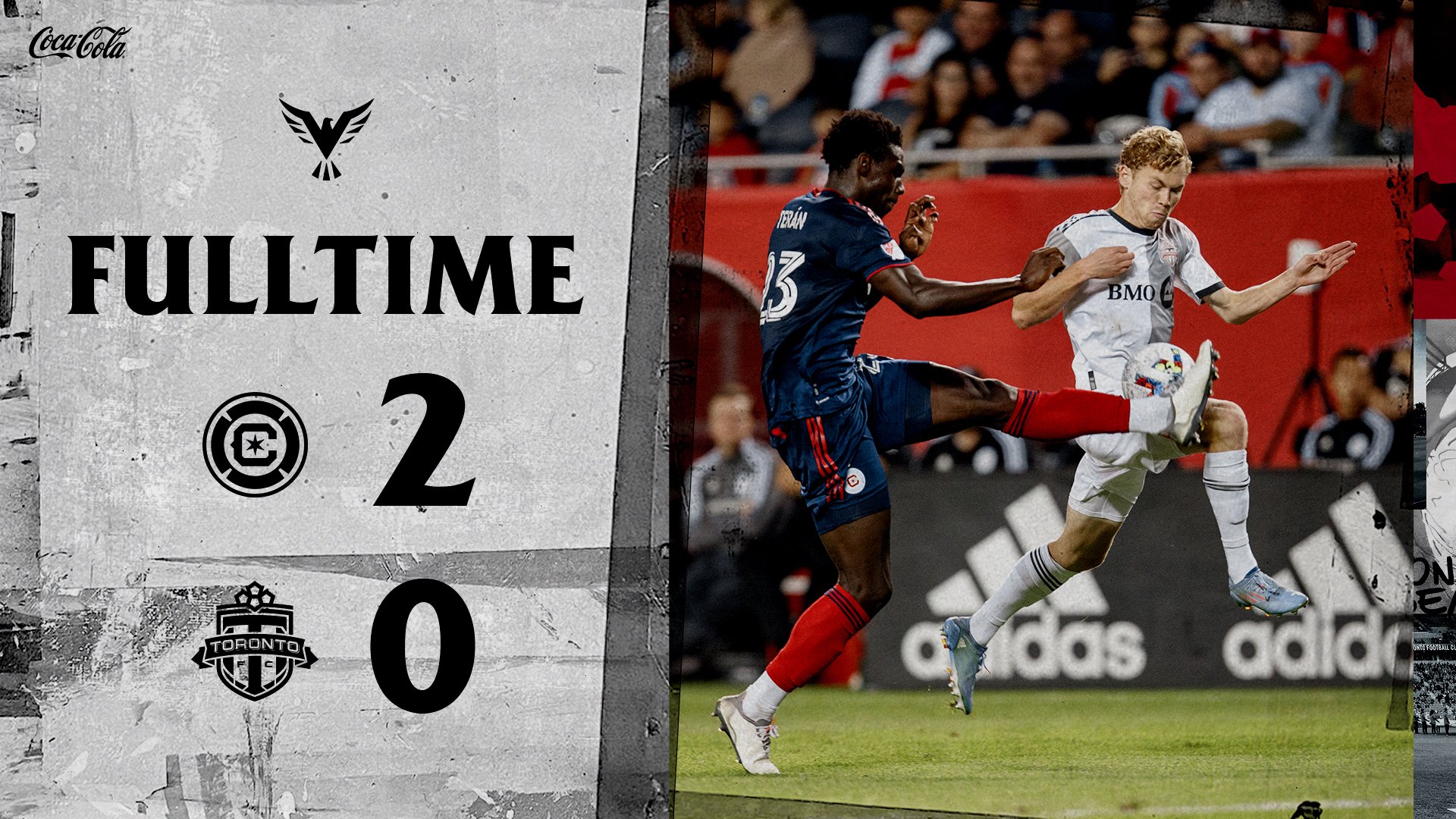 Toronto FC's woes away from BMO Field continued on Wednesday night as they were shut out by the Chicago Fire, who picked-up the 2-0 win and three-points at home.
TFC head coach Bob Bradley went with a 4-3-3 formation: Quentin Westberg started in-goal; Luca Petrasso, Shane O'Neill, Chris Mavinga, and Kosi Thompson on the backline; Jonathan Osorio, Mark-Anthony Kaye, and captain Michael Bradley in the midfield; and Jayden Nelson, Jesus Jimenez, and Deandre Kerr as the attackers up top.

All eyes were on Kaye, who was making his debut for Toronto after being acquired via trade from the Colorado Rapids in exchange for Ralph Priso, allocation money, and a first-round MLS SuperDraft pick.
The Canadian is no stranger to Bob Bradley's style of play as he spent three-years playing for him at LAFC and now slots into TFC's midfield trio with Bradley and Osorio. The trade was well-received from fans as Kaye is currently a fixture on the Canadian national team, which qualified for the upcoming FIFA World Cup in Qatar.

Toronto didn't get off to a great start. They conceded an early goal in the fourth-minute after a giveaway from Mavinga found it's way to Jhon Duran, who receved a through ball and struck it past Westberg with his left-foot to give Chicago the 1-0 lead. This clearly wasn't an ideal start for Toronto as they were playing from behind right from the start.

Chicago weren't done with their early onslaught as they added a second goal 12 minutes later. This time, Duran broke away from Mavinga with ease and scored his second of the match to extend the Fire's lead. It was a rough night for Mavinga as he would then be forced to sub off due to an injury.

Mavinga's injury could impact the club because of their current situation on the backline following Carlos Salcedo's departure. Bob Bradley was honest in his assessment of Toronto's center-back depth by saying, "it's an area that we're thin no doubt about that."

Toronto performed better in the second but were unable to rally back and get on the scoresheet like they did against San Jose this past weekend. Kaye played 63 minutes and had a great scoring opportunity in his TFC debut.
While speaking with Kaye post-match, he gave his thoughts on how the midfield performed as a collective unit and whether there are any adjustments they'll have to make going into their rivalry match with CF Montreal.

"I already kind of have an understanding of how Oso (Osorio) and Mike (Bradley) play. Both players love to get on the ball and move the ball forward, and I like to find spaces to be able to turn and to play forward too, so I think we compliment each other. We could see throughout the game that we were looking to try and find each other, which is important when you're playing in this system, but I don't think we need to change anything. You got to keep hammering at the same things consistently that we do week-in and week-out at training, so I don't see the need to change anything going into Montreal.

Obviously, we continue to be more aggressive when we're stepping up and really, I think we need to be a threat in-behind. I think we need to test the opposition's backline and make them feel a little bit of pressure, but the midfield, I'm comfortable there with Mike and Oso."

During his post-match press conference, Bob Bradley also discussed the team's effort tonight.
"In an away game vs. a team that just lost after being ahead by two goals, we didn't have enough guys tonight that really were ready for all parts of the game from the beginning," said Bradley.

Overall, it was a disappointing result for Toronto. They're at a point in the season where they need results and the loss will continue to make things difficult. Despite the impending arrival of Lorenzo Insigne and Federico Bernardeschi, the team are currently chasing a playoff spot and need to turn things around before it's too late.

Toronto are the road again this Saturday as they take on their rivals CF Montreal at Saputo Stadium.