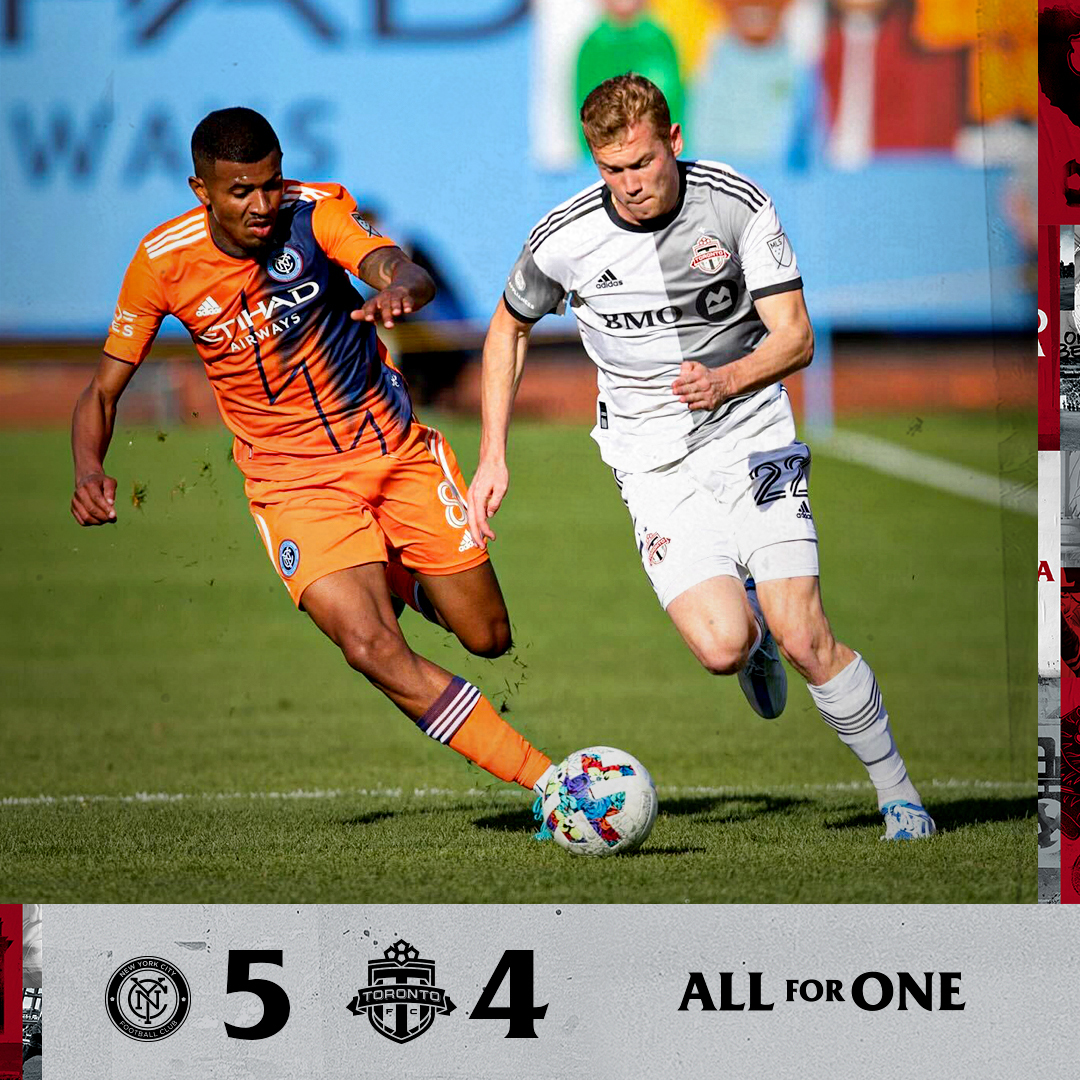 New York City FC scored four unanswered goals and a fifth for good measure to secure a victory in what ended being a thriller against Toronto FC.

Toronto coach Bob Bradley went with a 3-4-2-1 formation with the return of his DP central defender. Alex Bono started in-goal; Chris Mavinga, Shane O’Neal, and Carlos Salcedo on the backline; Jacob Shaffelburg, Jonathan Osorio, captain Michael Bradley, and Kosi Thompson in the midfield; Alejandro Pozuelo and Luca Petrasso on the wing; and Jesus Jimenez as the striker in the middle.

TFC did well early on by pushing the pace and getting the ball into the box. It paid off for Toronto as they got on the scoresheet in the 13th minute. Osorio spotted Jiminez with a nice cross pass in the box and the Spaniard put the ball in the net to give Toronto the 1-0.

Scoring the early goal was uncharacteristic for Toronto last season, but they have on the right side of the early goal this season. It looked as though New York scored the equalizer shortly after, but VAR determined that there was they were offside, which resulted in the goal being overturned.

Jimenez added another goal in the 27th minute when he found an opening in NYCFC’s backline. He received a through ball and calmy chipped the ball over the goalkeeper into the net. His composure and skill was on full display as he executed that spectacular finish to cap off the first-half brace.

With the first-half brace, Jimenez now moves into a tie with Austin FC’s Sebastian Driussi for the league lead in goals. He has been a very productive signing for TFC as he has been exceptional so far.

NYCFC eventually got one back as Valentin Castellanos scored in the 38th minute to put his side within one.

The momentum swung in New York’s favour in the second-half. They scored three unanswered goals and in less than 15-minutes, they had the 4-2 lead. Thiago Andrade, Santiago Rodriguez, and Keaton Parks were the goal scorers, which was a clear confidence booster.

New York were rolling as they extended their lead to two goals and applied more pressure on Toronto. In the 75th minute, NYCFC’s Gabriel Pereira struck a perfectly placed shot that beat Bono to extend the lead to three. It was the fifth straight goal for New York and it looked as though the game was getting out of hand for Toronto.

Thing got interesting though as substitute Deandre Kerr scored in the 86th minute to get Toronto withing two. Shortly after, TFC would get another lifeline. New York’s Alfredo Morales was shown a red card after picking up his second yellow card of the match.

On the set-piece play that followed, captain Michael Bradley headed the cross past goalkeeper Sean Johnson to get TFC within one goal. However, Toronto were unable to score the equalizer as the final whistle sounded to end the contest.

“The game had different parts,” said coach Bradley post-match. “They exploited the wide areas on both sides,” he added.

It was a positive sign for Toronto as they didn’t give up, but at the same time, it was a negative because they couldn’t maintain the lead in the second half.

Toronto FC are back in action next Saturday, when they host FC Cincinnati at BMO Field.