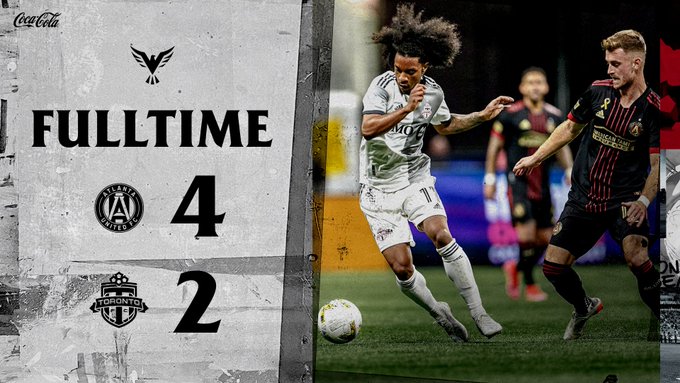 Toronto FC's playoff hopes diminish as they were defeated by Atlanta United in a crucial matchup in the MLS Eastern Conference playoff race.

Atlanta's Juan Sanchez was the difference maker for his side as he scored a hat-trick off set-piece plavs. This was a fantastic performance for Sanchez, especially considering he is a central defender.

Toronto head coach Bob Bradley was forced to turn to his bench as there were key players absent from the lineup. Lorenzo Insigne missed tonight's match due to personal family matter, Chris Mavinga was out due to injury, and Jonathan Osorio was out due to illness.

Both teams had their moments in the first half, but were unable to get on the scoresheet. Atlanta were awarded a penalty kick in the 11th minute after Brooks Lennon was brought down in the box. Luiz Araujo was unsuccessful from the spot as Westberg guessed correctly and made the stop.

It looked as though Toronto were going to receive a penalty kick in the 34th minute, but a VAR review determined that there was no foul and play resumed with an Atlanta free kick.

Despite failing to get on the scoresheet early in the first half, Atlanta redeemed themselves and scored in the 47th minute, when Sanchez scored a header off a corner-kick to give his side the 1-0 lead.

Toronto responded shortly after, when Akinola received a through ball from Jesus Jimenez, maneuvered his way around an Atlanta defender, and struck the ball in the back of the net to even the score at 1-1.

The wild second half continued as Sanchez added another goal in the 62nd minute to regain the lead for Atlanta. However, it would be once again be short-lived as Bernardeschi scored an equalizer off a penalty kick for his 8th goal of the season in only his 10th MLS match.

As the half progressed, Atlanta took control and were too much for TFC to handle. Thiago Almada scored in the 74th minute to regain the lead for Atlanta and Sanchez scored his third of the match in the 88th minute to seal the win.

Toronto are back in action next Saturday, when they travel to Orlando to take on Orlando City SC.