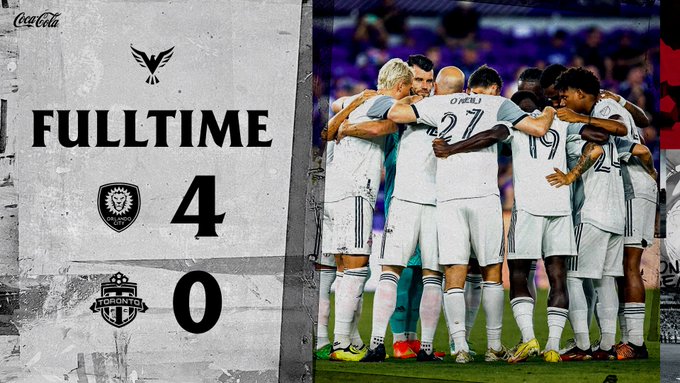 Orlando City handed Toronto FC their third straight loss and mathematically eliminated them from earning a playoff berth. This is the first time since 2013 and 2014 that Toronto have failed to earn a playoff spot in back-to-back seasons.

It was a lackluster start for TFC, who came into the match in desperate need of a win to keep their playoff hopes alive.

Orlando didn't waste any time getting on the scoresheet as Facundo Torres used the space available to score the opening goal of the match off a wonderful strike from outside the box that beat Westberg near-post to give his team the 1-0 lead.

It would go from bad to worse for Toronto in the 22nd minute as Ercan Kara received a through ball and struck a powerful shot past Westberg that once again beat him near post to extend the lead to 2-0.

Orlando extended their lead early in the second half as a result of an own-goal by MacNaughton. He scored an own-goal when he attempted to clear a cross from Orlando's Joao Moutinho. TFC faced an uphill battle at this point and needed to score 4 unanswered goals if they wanted all three points.

Toronto had a few chances from the Italian duo of Bernardeschi and Insigne, who linked-up on a few occasions but couldn't finish their scoring opportunities.

The Lions sealed the win in the 84th minute after substitute Tesho Akindele scored after finding an opening in the TFC backline and struck the ball far-post to extend the lead to 4-0. The Canadian had only subbed into the match 3 minutes prior and made an immediate impact by scoring the game winner.

Bob Bradley spoke about the inconsistencies in-goal after another disappointing result.

"In the last period, we've talked about our goalkeeping. It hasn't been as good as it needs to be if you're going to make a run."

During Michael Bradley's post match media availabiltiy, he added that although the club failed to earn a playoff berth, they're still on the right track.

"The work that's being done right now, while it's not going to pay off in terms of the success we would like this season, we still absolutely believe that the work to become a really good team is ongoing."

On a positive note, Jonathan Osorio subbed into the match for Kaye in the 72nd minute. He has been out of the lineup for quite some time as he was dealing with "neurological dysfunction." He is a crucial member of the roster and will be relied on in Canada's midfield for the FIFA World Cup in Qatar.

Toronto FC are back in action on September 30th, when they host Alejandro Pozuelo and Inter Miami at BMO Field.