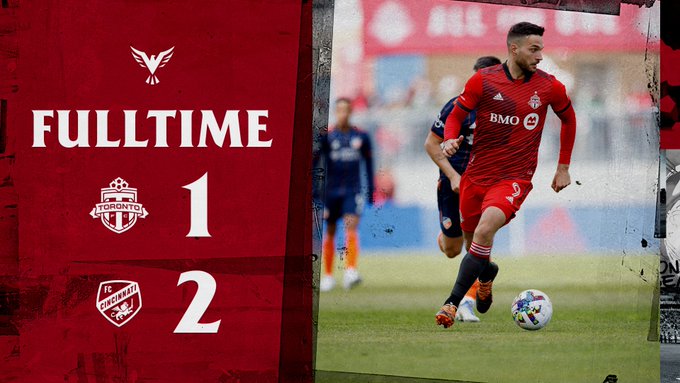 FC Cincinnati managed to hold on as they defeated Toronto FC 2-1 at BMO Field in the first of two straight matches with one another.

Toronto head coach Bob Bradley went with a 3-4-2-1 formation; Alex Bono started in-goal; Shane O'Neill, Carlos Salcedo, and Chris Mavinga backline; Luca Petrasso, Kosi Thompson, Jonathan Osorio,  captain Michael Bradley, Jayden Nelson, and Alejandro Pozuelo in the midfield; and leading scorer Jesus Jimenez as the lone striker.
There was a special moment prior to the start of the match as Toronto honoured Osorio. There was a special video presentation to celebrate the Canadian international's 300th cap for the club.  It was a special moment for a player that has played a key role in the club's success.
There were some brilliant moments from Nelson in the first 15-minutes of the match. The young midfielder's dribbling and creativity was on display as he went around Cincinnati's defender and got a shot on-goal that was stopped. The crowd cheered in appreciation for his efforts early on in the match.
Mavinga was subbed off in the 29th minute due to an injury. Infunanyachi Achara subbed on and as a result, coach Bradley was forced to make a few adjustments to his lineup early on in the match.
TFC had a few moments in the first-half, but were unable to finish their chances. They came back to haunt them in the 44th minute. It began when Salcedo's error led to a Cincinnati corner-kick. From there, former TFC centre back Nick Hagglund headed the ball to Ian Murphy, who struck the ball past Bono to give his side the 1-0 lead heading into halftime.
This was unfortunate for Toronto because aside from the late goal, they had done well and outplayed Cincinnati for the majority of the half.
FC Cincinnati continued to cause problems for Toronto on set-piece plays.  This time it was a throw-in that ended up leading to a goal. Luciano Acosta received the ball in Toronto's box and struck a shot that beat Bono on the far-side to extend Cincinnati's lead to 2-0. With the win, Cincinnati now move to 9th spot and one point back of Toronto for 6th place.
Toronto would answer in the 65th minute after Bradley delivered an excellent ball that found O'Neill in the Cincinnati, who headed to Jimenez for the finish. Jimenez continues to prove his worth as he scored his leaue leadining seventh goal of the season to get Toronto within one.
Ayo Akinola subbed into the match in the 74th minute to a loud ovation from the TFC faithful. This was his first match back since sustaining a season-ending injury last summer. His addition helped bolster an attacking trio that included Jimenez and Jordan Perruzza.
There were frantic momments in stoppage time that saw Toronto stop a counterattack, but the referee called a stoppage in play when two Cincinnati players were down in Toronto's box. TFC fans voiced their displeasure by booing the decision because Toronto had possession in Cincinnati's side of the field.
They had their moments to score an equalizer, but couldn't find the back of the net. Toronto won't have to wait too long to put this match behind them as both teams will play each other again this Wednesday in Cincinnati.
Photo Credit: Toronto FC (@TorontoFC)