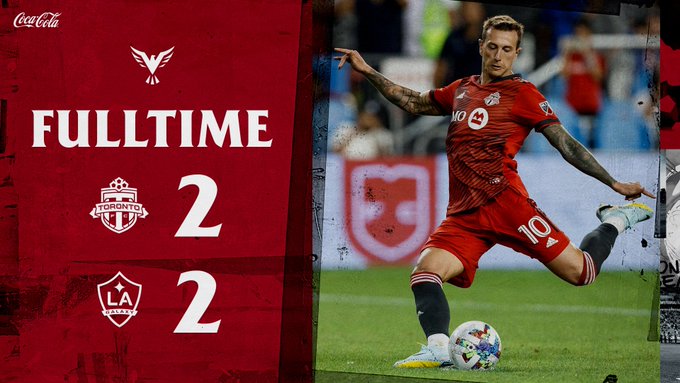 This match was the first of a two-game homestand for Toronto, who looked to close the gap for the final playoff spot in the MLS Eastern Conference.

Midfielders Jonathan Osorio and Mark-Anthony Kaye were once again out of the lineup. Kaye has missed 7 games as he is recovering from an injury, while Osorio missed his second straight game due to an illness.

It was special matchup for both sides as it was a homecoming for LA Galaxy head coach Greg Vanney, who was returning to BMO Field for the first time since parting ways with the club and becoming the Galaxy's new head coach.
Vanney was part of the most successful moments in the club history including their historic 2017 MLS season that culminated in the team achieving the domestic treble - MLS Cup, Supporters' Shield, and Canadian Championship, and runner-up in the 2018 CONCACAF Champions League.

Former TFC midfielder Victor Vazquez, who was also a member of the historic season, was also in the Galaxy's starting lineup and returning to BMO Field for the first time since leaving the club.

The team is coming off an impressive win that saw them earn a clean sheet on the road against Charlotte FC. Meanwhile, the Galaxy were coming off a road win of their own as they defeated the New England Revolution 2-1.
The Galaxy have a few attacking threats of their own. Douglas Costa was Bernardeschi's former teammate at Juventus, Riqui Puig recently joined the club from Barcelona, and of course Chicharito, who has been the club's go-to striker since joining the club in 2020.
Toronto came up aggressive and were close to opening the scoring in the opening 10 minutes as they had three very promising scoring opportunities. Their best chance came when Insigne received a nice pass from Nelson, who maneuvered around two Galaxy midfielders, and crossed to Bernardeschi, but the Italian headed it wide of the goal.
Los Angeles opened the scoring in the 24th minute off an excellent free-kick by Douglas Costa. The Galaxy were awarded the free-kick in a favorable spot outside the box after Mavinga committed a foul.
Mavinga redeemed himself in the 29th minute as he stopped Costa with a perfectly timed slide tackle while he was making a run at the TFC goal.
Toronto were unable to capitalize and score an equalizer prior to halftime. They had some moments, which included a free-kick attempt outside the box, but Bernardeschi's attempt was blocked by the wall.
It was Academy Day at BMO Field as the club had their academy players and staffs in attendance. Prior to the start of the second half, each academy team and their coaches lined up and shook Vanney's hand on the sideline. It was a nice gesture as the academy players got to show respect to the most successful coach in club history, while the coaching staffs got to reunite and catch up with Vanney.
There was an odd VAR review in the 53rd minute after MacNaughton was shown a yellow card for striking the ball at Vazquez after the ball went out of bounds. The call remained a yellow card, which was fortunate for Toronto as it meant that they wouldn't be down to 10-men.
Shortly after, it looked as though Toronto scored the equalizer after Insigne crossed the ball to Bernardeschi, who got a touch on the ball and put it in the net. However, the linesman's flag went up and the goal was waved off for an offside.
Okello, Achara, and Jimenez subbed on in the 60th minute and it ended up being a great adjustment for coach Bob Bradley. Toronto scored in 62nd minute, when Achara found Jimenez in the box and delivered a cross-pass that the Spaniard struck in the back of the net. This was an important goal as it ended Jimenez's scoring slump.
Toronto was awarded a penalty kick in the 81st minute after Bernardeschi was brought down in the box. The Italian was successful from the spot as he struck the ball near-post. Jonathan Bond guessed right, but he couldn't make the stop. Bernardeschi continued his great run of form as it was his 6th goal in 8 games.
It looked like TFC were closing in on three points and a crucial win at home, but Puiq spoiled that as he scored a wonderful goal n the 89th minute to level the scoring at 2-2.
During his post-game press conference, coach Bob Bradley mentioned that it was a disappointing result, especially considering where the team could have been in the standings had they won.
"We're all disappointed.It's a night where you gotta fight through things. You have to be a team that has a strong mentality," said Bob Bradley.
Toronto would have to settle with a draw and one-point. They are back in action on Sunday, when they host rivals CF Montreal at BMO Field.
Photo Credit: Toronto FC (@TorontoFC - Twitter)