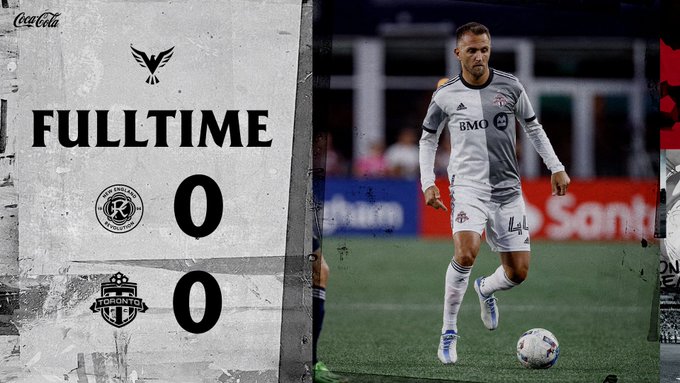 Toronto and New England played to a scoreless draw after Lorenzo Insigne's second half penalty was stopped by Dorde Petrovic.
Toronto FC head coach Bob Bradley went with a 4-4-3 formation: Alex Bono started in-goal; Jahkeele Marshall-Rutty, Lukas MacNaughton, Chris Mavinga, and Domenico Criscito on the backline; Jonathan Osorio, Jayden Nelson, and captain Michael Bradley in the midfield; and Lorenzo Insigne, Jesus Jimenez, and Federico Bernardeschi as the attackers.
It was a milestone night for Bono as it was 150th match in all competitions.
Mark-Anthony Kaye was absent for the second straight match. The Canadian midfielder picked up a knock in last week's win over Charlotte FC, which kept him out of the lineup on Tuesday and again tonight.
TFC were looking to bounce back from a heartbreaking loss to Vancouver  in the Canadian Championship final, which required penalty kicks to determine the winner.
Bernardeschi and Insigne did a great job linked up on a few occasions. Their best opportunity came in the 43rd minute when Bernardeschi found Insigne with a pass after he had found an opening in New England's box, but his shot was stopped by 23-year-old Revolution goalkeeper Dorde Petrovic.
There was speculation as to long the two Italian Designated Players would play, especially considering that they are essentially in pre-season mode. In Insigne's case, he is coming off an injury and played two matches in 4 days.
Bernardeschi had another great scoring opportunity in the second half, but his shot hit the post. Moments after Bernardeschi was subbed off, Insigne had anther  scoring opportunity of his own, but his shot was stopped.
Deandre Kerr, who subbed into the match, was brought down in the box, which awarded Toronto FC a penalty, After lengthy VAR delay, the referee reviewed the play and the call remained a penalty.
Insigne, who was a successful penalty taker with Napoli, stepped up to the spot, but couldn't convert. Petrovic came up big for New England once again to keep the score level. Insigne played the full match, which was a positive sign. He played the 45-minutes last Saturday, 87-minutes on Tuesday, and the full 90-minutes tonight,
Photo credit: Toronto FC (@TorontoFC - Twitter)