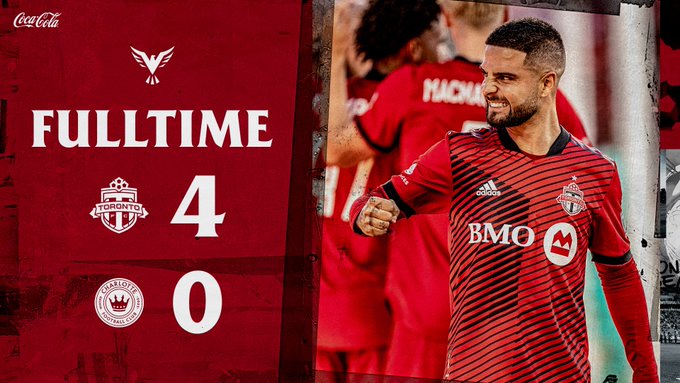 Toronto FC ushered in a new era as they picked up a dominant 4-0 over Charlotte FC. 29, 067 packed BMO Field to witness the arrival of Toronto FC's newest Designated Players.
Toronto head coach Bob Bradley finally had his Designated Players at his disposal. He went with a 4-3-3 formation with Alex Bono starting in-goal; Domenico Criscito, Lukas MacNaughton, Shane O'Neill, and Kosi Thompson on the backline; Mark-Anthony Kaye, Jonathan Osorio, and captain Michael Bradley in the midfield; and Jesus Jimenez, Federico Bernardeschi, and Lorenzo Insigne as the attacking trio.

All the attention was on Bernardeschi and Insigne, who made their MLS debuts. The Italian wingers were members of Italy's Euro Cup winning squad last July. Both players were met with a loud ovation when their names were announced in the starting lineup.

TFC's management have been active this past month as they made another addition to their backline as Canadian defender Doneil Henry was signed for the remainder of the season to add depth to the central defender position, which was a void that needed to filled following the departure of Carlos Salcedo.

Insigne made his presence felt early on. He found his teammates with crisp passes and created plays in the open space. The team fed off the energy of the passionate crowd at BMO Field. They were loud from the opening whistle and were cheering Insigne every time he touched the ball.

Toronto swarmed Charlotte in the opening moments of the match. They were dictated the pace of play and Charlotte were unable to match their intensity on both ends of the field.

Osorio opened up the scoring in the 4th minute after the ball took a deflection off him as he was pressing in the box. He never gave up on the play and was rewarded with an early goal.

TFC's onslaught continued as they capitalized on a set-piece play to extend their lead. Bernardeschi's cross found Bradley, who headed the ball past Charlotte goalkeeper Kristijan Kahlina and extended Toronto's lead to 2-0 only 10 minutes into the match.

Bernardeschi continued Toronto's dominant half by striking a fantastic shot from well outside the box that beat Kahlina for his first MLS goal and first goal in a Toronto FC uniform.
Insigne and Bernardeschi's dynamic offensive abilities were on full display throughout the first-half. They were linking up well with their midfielders and creating plays off the wing that resulted in three goals in the first 45-minutes.

Toronto added another goal before the end of the first-half after Insigne found Bradley, who maneuvered past the defenders and chipped ball over the goalkeeper for his second of the match. Osorio intercepting the ball began the play that ultimately led to Bradley's first-half brace.
Bob Bradley took advantage of the 4-0 score at halftime and  made substitutions at the start of the half. Both Insigne and Bernardeschi were subbed off, which is a smart move considering Toronto plays a mid-week cup match on Tuesday.
Henry was among the players that subbed on at the beginning of the second half. It marked 29-year-old's first appearance since 2014.
Charlotte performed much better in the second half as they were able to build momentum and had promising scoring opportunities. TFC fans were almost treated to another brilliant goal when Jimenez attempted a scissor kick that went over the crossbar.
Moments later, Toronto were gain an advantage after Charlotte's captain, Christian Fuchs, was shown a red card for a reckless challenge on Jayden Nelson, who was the last man and had a clear path to the net. In addition, Charlotte head coach Christian Lattanzio was also shown a yellow card for arguing with the referee as well as the linesman.
Bono came up with a big save on a strike from outside the box in the 75th minute to keep the 4-0 and not give Charlotte any confidence.
Toronto are back in action on Tuesday, when they travel to Vancouver to play the Whitecaps in the 2022 Canadian Championship final. It's a significant match as the winner will receive a berth into the CONCACAF Champions League.
Photo Credit: Toronto FC (@TorontoFC - Twitter)