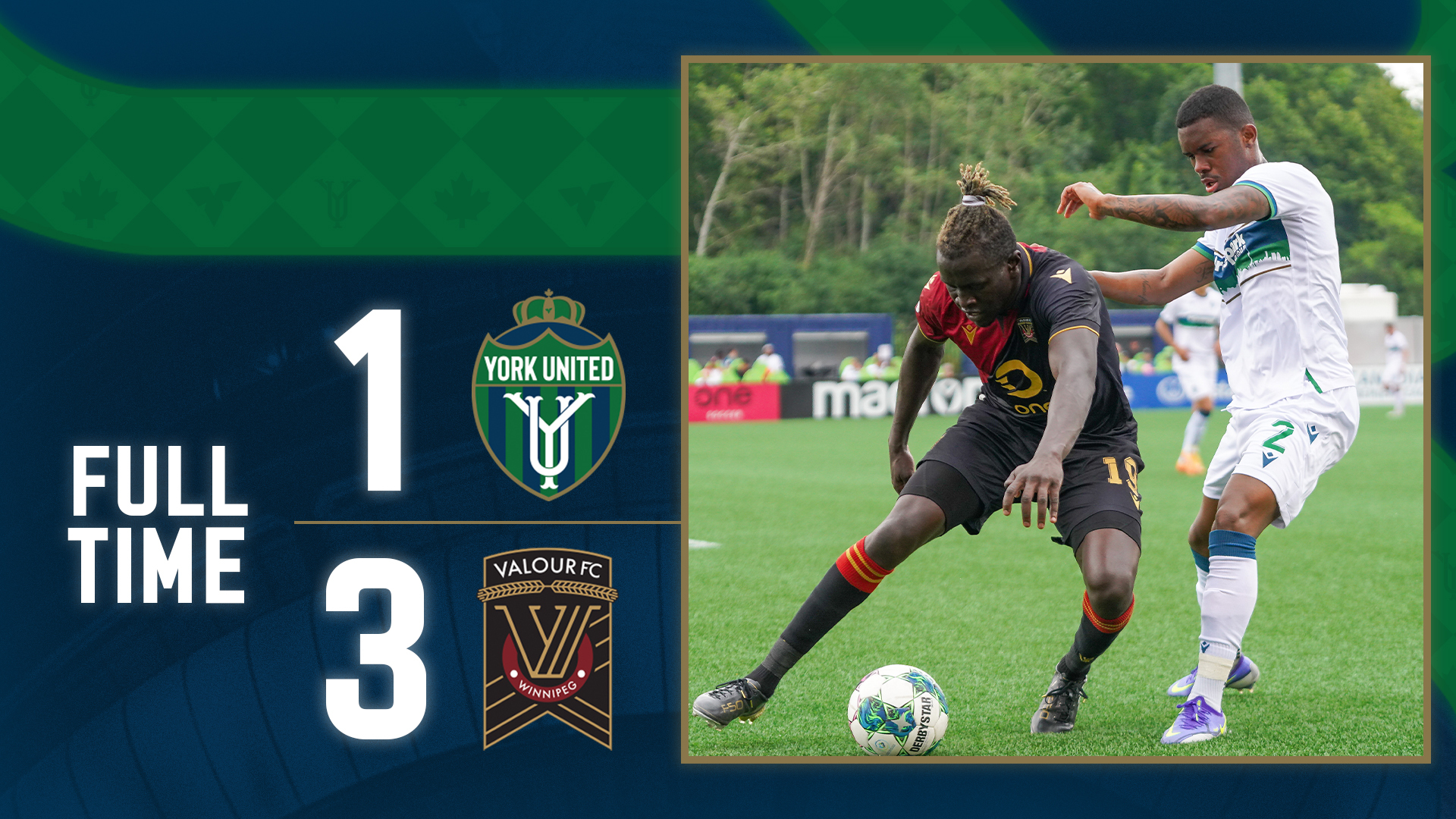 Valour FC earned the full three points on the road this afternoon as they defeated a depleted York United FC side 3-1 at York Lions Stadium.York United FC head coach went with a 4-2-3-1 formation: Niko Giantsopoulos started in-goal; Eduardo Jesus, Jordan Wilson, Dominick Zator, and Chrisnovic N'Sa on the backline; Noah Verhoeven, Matteo Hernandez, Isaiah Johnston, and Max Ferrari in the midfield; and Lisandro Cabrera and Osaze De Rosario as the attacking duo.Valour FC were victorious in their last encounter. De Rosario, who missed a penalty-kick in that match, was close to getting his club on the scoresheet early as he test the Valour goalkeeper with a shot to the near-post, but was stopped. This was a positive sign as York were more aggressive from the opening whistle.There was a scary moment in the 16th minute as Giantsopoulos went down. The club has been dealing with a combination of many injuries, international call-ups, and suspensions, and losing their goalkeeper would've made matters worse. Fortunately for York, he was able to collect himself and remain in the match. York's backup goalkeeper, Michael Williams was on the bench if needed for the change. The 16-year-old was upon and warming up while Giantsopoulos was being treat, but wasn't needed at that point. Johnston had very promising moments in the opening half. His skill and creativity in midfield opened up the play for York and posed a threat on the counterattack. He built off his great midweek performance against the Vancouver Whitecaps and seemed a lot more confident.    There was 5 minutes of added time to end the opening half which made for a back-and-forth midfield battle as there was an opening  for Valour to score but Zator came up big for his side and made a crucial block. Valour took the lead in the 51st minute after a cross-pass found Alessandro Riggi, who struck the ball in the back of the net to give his club the 1-0 lead.Despite the goal, York weren't fazed at all and immediately answered. De Rosario scored the equalizer after connecting with a diving header that beat the Valour goalkeeper and evened the score early in second half. York were dealt a huge blow in the 72nd minute. They had been playing well following De Rosario's goal, but a set-piece play would cost them as Moses Dyer headed a corner past Giantsopoulos to give Valour the 2-1 lead. York's roster being depleted provided an opportunity for other players. Cyrus Rollocks subbed into the match to provide another attack-minded player. Rollocks is no stranger to the team as he was a member of the inaugural York United, then York 9 FC, roster. He is signed to a two-match deal. Valour added a third goal in the 89th minute off the counterattack that saw Sean Rea strike the ball into the empty York net, which put the game out of reach. Photo Credit: York United FC (@yorkutdfc)