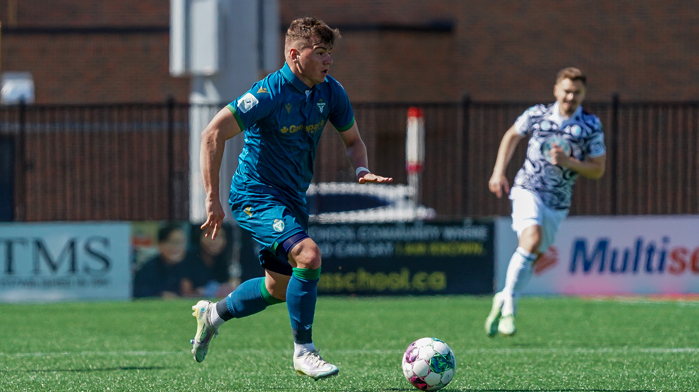 York United FC and Pacific FC played to a scoreless draw this afternoon and pick up one point in the standings.

It was a special match for Diyaeddine Abzi, who was playing in his final CPL match at home for York United FC. He will play once more for the club as he is expected to play in this week's Canadian Championship semifinal against MLS-side Vancouver Whitecaps. The defender will be moving overseas to Europe as he agreed to terms with of Pau FC of Ligue 2, which is the second division in France.

Ferrari had a great opportunity to make an impression on Nash as this was his first start of the season. He made his presence felt early on as he was creating off the right-wing and drew a foul early on with his pace.

York had many promising attacks from that were created through their link-up play in the midfield. Ferrari and N’Sa linked-up well and resulted in Ferrari finding De Rosario with a cross, but he headed the ball over the net.

Pacific did a great job in ensuring that York’s attacks weren’t disrupting their play from the backline.

Gutierrez took a hard challenge, that led to him being subbed off. This is a massive blow for the club as they were already depleted coming into today’s match with many crucial players dealing with injury. The timing is also unfortunate as they have a mid-week Canadian Championship semifinal matchup.

Ferrari and N’Sa found a great partnership and were creating offense off the right-wing. Jordan Wilson and Dominick Zator also did well in keeping the backline calm when Pacific would find opportunities off the counterattack through the play of Marco Bustos.

Ferrari was the biggest scoring threat for York in the opening 45-minutes. He was engaged throughout the half and did well in giving his teammates the best possible opportunity to get a goal on the scoresheet. With the current injury status of could play a pivotal role in the team’s midseason turnaround if he can remain healthy.

York’s best opportunity to score came in the 52nd minute when Pacific turned the ball over, which led to Kane finding his teammates with a cross pass, but they were unable to convert as Ferrari nearly missed the ball.

Shortly after, Abzi had an incredible opportunity. He was wide-open in the box, but struck the ball wide of the net. It would’ve been a fitting end to his CPL career, but it wasn’t meant to be.

Bustos was a scoring threat throughout for Pacific. He was finding his attackers with through balls, but York’s central defender did well to maintain their shape, which led to Pacific’s players being ruled offside.

It’ll be a busy week for York United. They travel to Vancouver to play the Whitecaps in the Canadian Championship semifinal on Wednesday and host Valour FC next Sunday at York Lions Stadium.