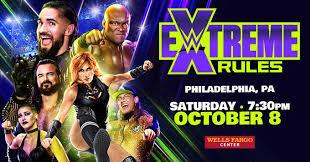 Following months of speculation, hints, clues, and guesses, Bray Wyatt is finally back in WWE.

WWE's Extreme Rules took place in Philadelphia, Pennsylvania in front of a sold-out crowd. The show was action-packed from start to finish with a staggering amount of long-term storytelling culminating with the epic return of fan-favorite Bray Wyatt.

The show opened with an appropriately Paul Heyman voiced video package featuring a spelling bee segment to spell out “EXTREME”.  Heyman was formerly the Chiarman for ECW, which called Philly home.  This clever opening featured a little boy in a spelling bee, being asked to spell extreme.  The child asks for the definition, then for the word to be used- in a sentence, and finally place of origin, to which Heyman emphatically replies: “Philadelphia”.

We also saw Finn Balor and Judgement Day completely demolish Edge, Rey Mysterio and even Edge’s wife Hall of Famer Beth Phoenix, the latter having come to Edge’s aid after being badly outnumbered by Judgement Day.  Edge sacrified himself, weakly declaring “I Quit” to spare Beth from getting a vicious chairshot to the head at the hands of Rhea Ripley, but to no avail.

We also saw The Miz, who did not have a match, being awkwardly followed around the arena by the Philly Flyers Macot, Gritty.  On RAW, previously the ever-present Dexter Lumis turned out to be hiding in a hockey mascot costume to attack The Miz, so appropiately The Miz attached Gritty, assuming it to be Dexter plotting to attack him yet again.

However, as the camera pans, we see in what has become hiariously predictable, Dexter lurking behind The Miz, waiting patiently to grab him.   Dexter puts Miz to sleep in yet another vicious sleeper hold, and helps poor Gritty up, who then takes kick at Miz of his own as payback.

This deeply personal feud has been building for month, with both men spewing vitriol to each other regarding their alleged shortcomings as husbands, men and wrestlers.

UFC Hall of Famer Daniel Cormier was the special guest referee for this match, getting his own special entrance to much fanfare.

Matt Riddle comes out next, noticeably without his signature  scooter. Rollins enters with his hair in a ponytai, very different from his usual wet hair being worn down.  These small but significant differences indicated that both men were prepared to take their game to whole new level of focus with this match.

The fight pit rules demand that  the only way to win is by tap out or submission, or you can’t make it to your feet by the count of 10, thus being counted out.

Former MMA fighter Riddle clearly had the experience and muscle memory advantage in this brutal match.  Daniel Cormier had to tell both Riddle and Rollins not to touch him and to focus only on their opponent.

Additional rules for this match indicate that knockout or submission has to take place inside the ring; this became important when in the latter half of the match, Rollins climbed the catch taking it to the ledge on the upper half of the cage.

Rollins barked orders at Cormier to count out Riddle after several buckle bombs left him struggling, but only counts in the ring, not up on the ledge. Eventually, Riddle jumped off the ledge with an absolutely devastating backdrop directly onto Rollins.  Both men were groaning from pain, but it was enough to win Riddle the match.

Next, the show took a dark turn. Everything fades to black.  It’s time.

The Backstory: Bray’s Journey from Released to Epic Return

Since Bray's shocking release from WWE in July 2021 after 12 years with the company, the WWE Universe has been hoping, begging, pleading, and at times, demanding his return.

Bray's return tonight at Extreme Rules was extremely well received, causing a massive pop with the crowd, rivaling the epic returns of CM Punk to AEW in 2021 and Cody Rhodes to WWE at WrestleMania 2022.  Bray's well-timed unmasking video has already amassed over 665K views in one hour.

An incredibly detailed yet highly ambiguous array of QR codes, cryptic tweets, costumed people walking through live WWE events, and even crossword puzzles came to an epic end today when immediately following the conclusion of the Matt Riddle and Rollins fight pit match, the lights dimmed and commentator Michael Cole could be heard saying "Are we on the air, guys?"

A haunting slowed, and reverbed version of the Sunday School Hymn “He’s got the whole world, in his hands” beings playing, and immediately the crowd goes wild,  Spotlight zooms on all the Firefly Funhouse characters in human form come into focus, one by one: Buzzard Pig, Rabbit, Sister Abigail, The Fiend, and finally…..BRAY HIMSELF! As wrestling Twitter commentator and popular personality Stephanie Hypes pointed out, that’s six characters in total, clarifying Bray Wyatt’s current Twitter handle “Wyatt 6”.

It’s also worth noting that the Fire Fly Fun house was shown as dusty and defunct, and the old theme song played briefly before fading to show Wyatt’s new mask, which is noticeably similar to that worn by the villain in the movie “The Black Mask”.  Many Twitter users pointed this out immediately, including myself and Wrestle Features. Allegedly, the same creator of the original Fiend mask is also the same creator of the mask from The Black Phone, so this tie-in could be intentional.

Bray slowly emerges from a door with his signature lantern, before slowly taking off the mask to reveal himself. The crowd went absolutely ballistic. It was truly one of the most detailed, elaborate, and well-played returns in wrestling of all time, if not the best. Fans both on and offline have been overwhelmingly positve, as indicated by at the time of this writing, Wyatt 6 is the #1 trending topic on Twitter, with #2 being #BrayWyatt.

You can watch the full video of the elaborate and epic Bray Wyatt return here.

Update: It has been confirmed that the creator of Bray's Fiend mask did indeed make The Black Phone mask as well, directly from the artist himself, Jason Baker!