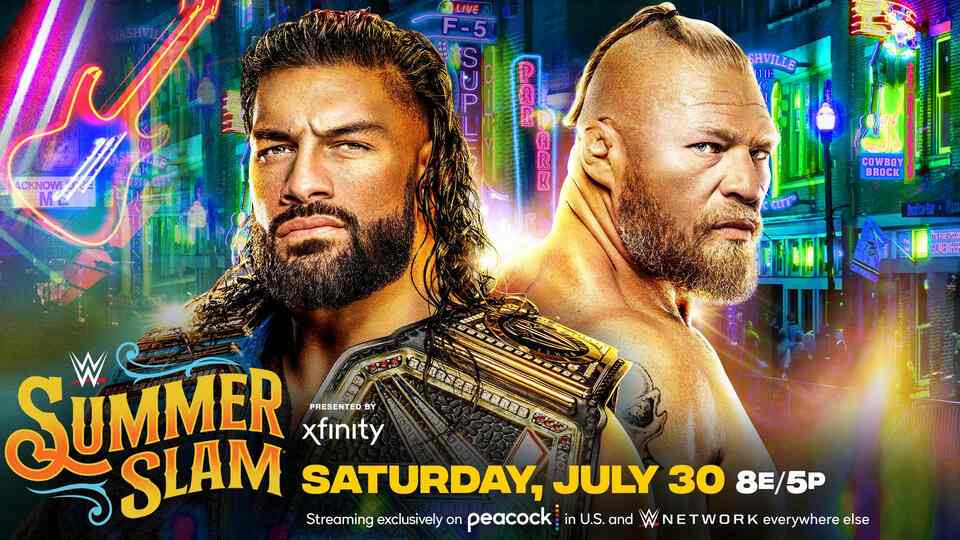 Last SummerSlam Becky returned and shocked the world when she beat Bianca in 26 seconds. We are now full circle and Bianca looks to defeat Becky and shut up her naysayers. Bianca night was silver and blue while Becky was red and gold! Becky targeted the arm of Bianca very quickly. However, Bianca was able to flatten Becky with a dropkick and a standing moonsault.

Outside the ring Becky had Bianca on a barricade and crushed her with a leg drop. Back in the ring Bianca tried a suplex, but Becky rolled it into a cradle pin. Outside again this time Bianca had control. She sent Becky face-first into the apron and on her back with a suplex. Becky planted Bianca with Diamond dust off the ropes. Becky in the middle of the ring had Bianca with a disarmher. Bianca got to the bottom rope and to the outside. She destroyed Becky with a KOD on the outside. Becky was almost counted out.

Bianca looked to go high, but Becky stopped that quickly. Becky yanked her off the top rope by her braid. Then a manhandle slam, but it was not over yet! Becky now tried a manhandle slam from the top rope, but Bianca turned it into a Spanish Fly! The champion ended it all with a KOD!

Becky put her and out for a handshake and the two women hugged it out. Hopefully this is the end of their story.

BAYLEY IS BACK! It has been over a year since she has been seen on WWE TV. She came out while Bianca was still celebrating her victory.

Dakota KAI IS BACK! She is a former NXT Superstar is also back in WWE. She was released by the company, but it seems she is back with the new regime of Triple H.

IO Shirai also came out. These three women seemed to be a new faction. They all the made their way to the ring. Bayley looks to be the leader and still a heel. Becky came to help Bianca. Bayley and her crew backed away and out of the ring.

Logan Paul Vs The Miz (Accompanied by Ciampa & Maryse)

Logan Paul is looking to win his first ever one on one match. The Miz tricked Logan and landed a kick to his face. Showing the WWE Rookie how it is done. Logan did the same move back to the Miz. Logan rolled up the Miz and tried to win with a pin. Followed that with a moonsault off the apron and onto the Miz.

Back in the ring the Miz landed some chops on Logan in the corner. Logan reversed and did the same to the Miz. The Miz put Logan in a chin lock. Logan looked very tired more than your experience WWE superstar. However, he was able to land a blockbuster off the second rope! Logan then tried to pin the Miz off a running powerslam. That would never be enough. He put the Miz into the figure four, the Miz’s submission move. The Miz got out of it. Logan crushed the Miz with a crossbody and a standing moonsault. Now in the corner Logan was almost hit by Ciampa. The referee caught it and ejected Ciampa.

Ciampa refused to leave and took a chair to stay. AJ Styles’s music, but he did not come down the ramp. He came from the WWE Universe and escorted Ciampa forcefully. Logan rocked the Miz with a phenomenal forearm. He then took apart the announce table. He put the Miz on the table and went to the top rope. Logan then sent himself and The Miz through the table with a frogsplash!

Logan got the Miz in the ring and pinned him. The referee was too distracted by Maryse. The Miz snuck over to get a framed polaroid to attack Logan with, but Logan moved out of the way. The Miz almost hit Maryse and out of all the chaos Logan flattened the Miz with a skull crushing finale to win!

Theory wants to win the United States championship back and cash in later on Roman or Brock. To do that he needs to defeat Bobby which is going to be tough. Before the bell could ring Theory attacked Bobby with the briefcase. Bobby got back to his feet and the match officially started. Theory was in control to start this match. Bobby gained some control and laid a beating on Theory. That made Theory leave the ring and try to walk out of the match with his briefcase. Bobby did not let him leave and got him back in the ring. Theory dropkicked Bobby. They then both exchanges shots to the face. Bobby missed a spear and sent himself into the ring post. Although that did hurt Bobby because he was able to put Theory into a hurtlock to win.

The Mysterios Vs Judgment Day

Rhea Ripley was at ringside supporting her Judgment Day male counterparts. This is not a tornado tag match there will be tags. However, all men started in the ring at once. Judgment Day started strong. Finn on Rey and Priest on Dominik. When they finally got one man in at a time it was Rey on Finn. Rey dragged Finn over to Dominik to make the tag and a double team move.

Finn got Dom to the mat and stomped away on him. Priest then dropped Dom with a huge kick across his face. Rey back into this was the giant slayer and landed a seated senton on Priest. Finn on the apron had a steel chair, but Rey took it off of him and attacked Priest with it. There are no disqualifications in this one. Rey tried a 619 on Priest but did not realize Finn tagged himself in. Finn took out Rey before he could dial up the 619. The father son duo had both Priest and Finn lined up for a 619. Before they could hit them, Rhea grabbed both their legs to trip them. They also had a third partner whether they knew it or not.

EDGE IS BACK. He is all in red and sunglasses! He looks badass and rose above these stairs that were on fire! He dropped Priest with a huge running boot! Then in the ring speared Finn! He then lined up Finn for a 619. Rey and Dom hit the 619 on Finn. Rey landed a splash and a pin.

Winners The Mysterios via Pinfall

Corbin started this match with some trash talking. And a shove. McAfee did not let that slide and was all over Corbin. Landing a superkick, and slugging away. Then sent Corbin into the steel post! Corbin dropped McAfee with a running dropkick and sent him flying. Just like that Corbin gained control. Corbin crushed McAfee with a deep six. Then tossed McAfee on the announce table. Corbin out a headset on and started talking about and to the parents of McAfee. Michael Cole said Corbin’s parents would be embarrassed and Corbin shoved Cole into his seat.

Corbin went to the top rope and McAfee got up there with him. McAfee dropped Corbin with a superplex. Then the two exchanged rights. McAfee up top again landed a swanton bambini on Corbin on the outside of the ring. Now back in the ring, Corbin knocked referee Charles Robinson down. With no referee McAfee hit Corbin with a low blow revenge for Smackdown. Off the second rope McAfee rolled up Corbin to pin him.

Jimmy started off against Dawkins in the corner. When Jeff counted to five because he was beating on him for too long in the corner Jeff yanked Jimmy off of Dawkins. He did however do the same when Dawkins returned the favour. Jeff was not just yanking Jimmy because of the superkick on Smackdown. Jeff did get in the faces of the Usos when explaining rules.

Dawkins and Jimmy were on the mat and both looking to tag in their partners. Montez and Jey came in at the same time. Montez was the one with all the momentum. Off a moonsault he tried to pin Jey. Then a standing blockbuster still not enough. Jey fought back with a pop-up neck breaker. Dawkins sent both Usos to ring side and jumped over the ropes and onto them.

Montez tagged in and Jimmy had no clue. Dawkins sent Jimmy into Montez with a shoulder tackle and into a suplex. Jimmy on the top rope landed an Uso splash. Now both Usos were on top of a rope each and both landed Usos splashes. Jey tried a superkick but almost hit Jeff. Jeff caught his foot and sent him backwards and into Dawkins. Dawkins hit a spinebuster and Montez landed a splash to win but Jey kicked out. The Usos planted Dawkins with a 1D to win.

Winners The Usos via Pinfall

Riddle is not medically cleared and WWE personnel were trying to get him out of the ring. Riddle called out Seth Rollins the man who injured him. Rollins came out and ran towards the ring while WWE Officials chased him. The men began to brawl but in the ring Rollins stomped Riddle again.

Liv defeated Ronda at MITB and now this is Ronda’s title rematch. Ronda was injured at MITB and was in a match before facing Liv. In this match they are both fresh. Ronda started strong and tried for an ankle lock fast. Liv hit a code breaker and tried Oblivion, but Ronda reversed into an armbar. She later put Liv in another armbar. Liv got out of both of them. Ronda just kept doing it. Liv kept getting to the ropes. The referee asked for medical assistance. Liv said she was fine to continue. My god another armbar. However, Ronda’s shoulders were on the mat and the official counted three for Liv to win. Liv was tapping out when the referee counted to two, but he did not see it.

Ronda snapped and attack Liv after the match and then the referee. She put him in an armbar and Officials had to get her off of him. She will be fined for touching an official.

Brock drove a tractor to the ring. Brock introduced himself as the country boy who will kick Roman’s ass. Brock jumped Roman before the match could start. On the outside of the ring, Brock suplexed Roman and sent him into the steel steps. Then a suplex off the steps and onto the ground. Brock dumped Roman into the WWE Universe. Brock is in full control! Roman has not done any damage yet. Roman did get some shots on Brock, but not many. Suplex city has come to Nashville.

Brock started to control the tractor. He lowered the lift. Brock then dumped Roman into the front loader, and into the ring from up high. He followed that with a few suplexes. Brock tried an F5, but Roman reversed into a submission. Brock then reversed into his own submission. The official broke the hold so he could count. Now back in the tractor, and he started to move the whole ring! He lifted the ring and sent Roman flying out of it.

The Usos got involved and started attacking Brock. He tossed them away with suplexes. Heyman demanded Brock stop the violence and take the championships. Brock F5ed Heyman through the announce table! Roman speared Brock!

Theory has arrived! He is running towards the carnage with an official and his briefcase. He knocked out Roman, but Brock F5ed him. The Usos superkicked Brock. Brock got up and was speared. Theory never officially cashed in. Roman started to beat on Brock with the briefcase. Now, Roman smashed the title on Brock’s face! Then he started to bury him alive with all the rubble at ringside. Roman retains!

Karrion Kross back in WWE

Bayley IYO SKY and Dakota Kai Were All Over RAW

The Miz Will Face Logan Paul at SummerSlam

Jeff Jarrett Will Be Guest Referee at SummerSlam