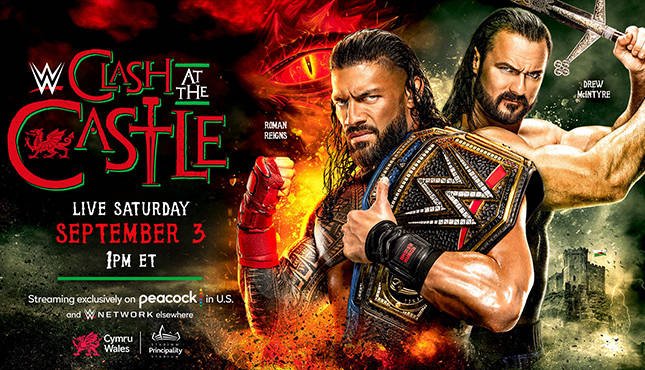 WWE Clash at the Castle, the first WWE premium live event from the United Kingdom in over 30 years, aired live from Cardiff, Wales to a massive crowd of over 62,000 members of the WWE Universe. The show delivered twists, turns, and surprises, and the exuberant live crowd made the home viewing experience quite exciting.

WWE Clash at The Castle Results

Winner: Damage Control.  It’s worth noting that Bayley pinned Bianca for this win, hinting at a future feud.  Of course, Bianca retains her Raw Women’s Championship as it was not on the line in this match, but this is notable because she has not been pinned at all in several months.

Winner: Edge and Rey Mysterio.  The standout of this match was truly what followed.  After partaking in celebration revelry, Dominik finally turned on Edge and his father Rey, cemented his long-awaited heel turn.  With a crotch kick to Edge, and a clothesline to his father, Dominik stormed out of the ring as The Judgement Day cackled and watched. It appears Dominik may join Judgement Day at a later time.

Winner: Seth Rollins.  This match was also extremely physical with numerous 2.99999 counts, leaving viewers on the edge of their seats.  The signature move of this bout was the suplex, with both men executing several while trying to subdue their opponent. As fatigue set in and neither man was able to get a full 3 count, Rollins brought out the trash talking to further get in Riddle’s head, again mocking his failed marriage as he did on Monday Night Raw earlier this week. A furious Riddle stormed out of the ring to grab a steel chair, and Rollins narrowly escaped being hit with it.  Rollins dashed back into the ring just ahead of Riddle, enough to catch him with a vicious curb stomp as he re-entered the ring, and secured a victory in the process.

Drew, hailing from nearby Scotland, was the beloved hometown hero with the obvious home-field advantage. The crowd was undeniably enthusiastic and roared their support for Drew as he made his ring entrance following a stunning montage detailing his years leading up to this point.

Roman, on the other hand, remains the undefeated heel and was booed/jeered heavily during his entrance, notably without The Usos or Paul Heyman.  Without The Bloodline by his side, Roman seemed visibly bothered by the crowd’s reaction to him, drawing reminders of his Big Dog era during which he was booed mercilessly by crowds weekly for several years.

The match got off to a bit of a slow start, with the electric crowd roaring both support and disdain simultaneously!  Both men acknowledged this, feeding off the energy.  Drew seemed to dominate early on in the match, launching Roman into the steel steps, and holding him off long enough to exchange words with Karrion Kross and Scarlett sitting ringside. Kross is clearly expecting to get his hands on Drew next.  We also see UK-native boxing champ Tyson Fury sitting ringside, and it appears to be foreshadowing that he will somehow be involved in this match.

Throughout the match, Roman intercepted Drew’s several Claymore attempts with Superman Punches and spears. We saw no less than 5 2.99999 kickouts leaving all viewers guessing about who would actually get the 3 count.

Late in the match, as both men lay gassed and hurting in the middle of the ring, we hear the music cue of none other than Mr. Money in The Bank (MITB), Theory.  As he promised he would, he ran out and hands his MITB briefcase to referee Charles Robinson intending to capitalize on the facts that both men were at this point exhausted.  Comedically, just as quickly he is laid out by Tyson Fury, and we neither see nor hear from him again for the rest of the match.

The crowd is buzzing as the match continues on.  Drew finally lands a Claymore and goes for the pin, but before he can get a full 3 count, the ref is pulled out of the ring by a black hoodie-clad figure.  As the camera zooms in, we see this is none other than NXT’s Solo Sikoa, brother of The Usos and therefore, another member of The Bloodline!  This is officially Sikoa’s main roster debut and in quite a grand fashion.

With this distraction, Roman is finally able to land a spear that gets him a 3 count, retaining and remaining The Undisputed WWE Universal Champion. After the match, Tyson Fury enters the ring and confronts Roman, leaving it uncertain if this will lead to hands being thrown. Nevertheless, Tyson shakes Roman’s hand, acknowledging him.  Roman then exits the ring and heads out with Solo Sikoa by his side.

Post-match, Tyson helps Drew to his feet and congratulates him as well, reassuring him that he should be proud.  He then leads a rousing rendition of “American Pie” to a supportive crowd, eventually getting Drew to join in.  Drew acknowledges the crowd and thanks them for their support with a song of his own as the show ends.